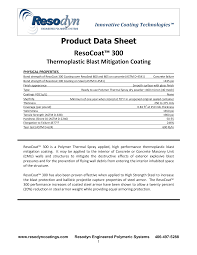 Blast Protection Coatings are designed to minimize the effects of explosions on buildings and structures. The U.S. Government has been testing elastomeric polymers for their impact-resistant properties since 1996. The first one to pass all blast mitigation tests was called PAXCON, and this coating is now being applied to many buildings around the world, including the U.S. Pentagon, the Federal Court House in New York, the Washington Naval Base, and several buildings throughout London.

A polyurea coating is used to protect concrete block walls. The application of the polyurea coating prevents shattered blocks and reduces the impact force on internal walls. However, this coating does not prevent internal fractures resulting from projectile impacts. It also deflects the blast fragments, which are responsible for the majority of injuries and deaths from explosions. This technology also helps prevent structural fractures by reducing the energy of impact on the building’s materials.

The impact force generated by an explosion can cause the front of a concrete block to shatter, causing a fracture in the inner wall. A polyurea coating helps to keep the front of the wall solid and prevents this. It also dissipates the impact force and prevents internal fractures. This is important in protecting critical infrastructures in a hostile environment. In addition, polyurea is also effective in absorbing shock waves.

A new material called polyurea has been developed for blast mitigation applications. This revolutionary new material was commercialised in the late eighties. It is made up of a polyurea that resists massive pressure. Because of its unique characteristics, it is a good choice for high-profile buildings and armored vehicles. It is also highly resistant to impact, and it is used in high-security military installations. The material is also available in many colors and textures.

Blast protection is a critical element in military operations. The material itself has many advantages. It is a strong and durable material that can withstand explosions. The coatings on buildings and structures can withstand a blast equivalent to a car bomb. It also dissipates impact force and keeps structures in place. It is widely used on the Pentagon and other high-profile government facilities. These materials are also safe to the environment, and they can protect your employees and clients.

Applied to buildings and structures, blast mitigation coatings can dramatically reduce the amount of property damage and casualties that result from explosive attacks. The sprayed-on polyurea coatings can prevent structural damage, and reduce the impact of flying debris. Ballistic protection coatings are especially useful for high-profile structures such as the Pentagon and government buildings. They can provide the protection needed to protect from blasts and ensure that the building remains in place.

The coatings are applied to the exterior of buildings. The US Marines, for example, use polyurea on their Humvees to protect the interior from IEDs. The polyurea coatings on the walls can prevent internal wall fractures and dissipate impact force. As a result, these protective coatings are effective in preventing internal and external wall fractures caused by explosives. So, what are you waiting for? The best Blast Protection Coatings are waiting for you!

This coating has numerous benefits. It can minimize the damages caused by hostile explosive attacks. Its polyurea coatings are made of an elastomer that can withstand enormous pressure. This coating is an excellent choice for armored vehicles and high-profile buildings. If you’re concerned about blasts, consider installing a Blast Protection Coating to protect your building. The advantages outweigh the disadvantages!

The US Marines wanted to add extra protection to their Humvees to protect against the effects of IEDs. They installed a protective liner called Dragonshield-HT (r) ERC. This material has the power to disperse a blast fragment without damaging the front of a structure. It also helps deflect and contain the impact force. For example, the coatings can protect from IEDs and reduce the damage caused by a terrorist attack.

PAXCON is an excellent choice for buildings to protect against explosions. This coating is a polyurea or polyurethane-based coating. Its flexible nature and high-strength properties make it a great choice for protecting against a blast. Further, PAXCON is much stronger than steel and is flexible. The material will flex during an explosion and not crack, which will increase the impact resistance of the building.

A Polyurea Coating that protects structures up to 20x Explosion Forces

Blast Mitigation - How to Minimize the Impact of Blasts